For the first year of our Master's studies in architecture at KTH, we were both designated one seat each in Studio Northern Grounds, with a "focus on the illusory and unstable concepts of grounds, interiors and their coming together as interior grounds", as well as the complex contextual conditions of the region of northern Scandinavia. With its emphasis on the "entwined relationships between physical and digital", we hope that the coming year will offer bountiful opportunities to widen and deepen our technological knowledge and digital ambitions.

To take a glance at our intra-studio activities, visit our Studio Northern Grounds page here. Please note that since the content is primarily aimed to be shared with studio colleagues and teachers, it is presented as-is and exclusively in English. 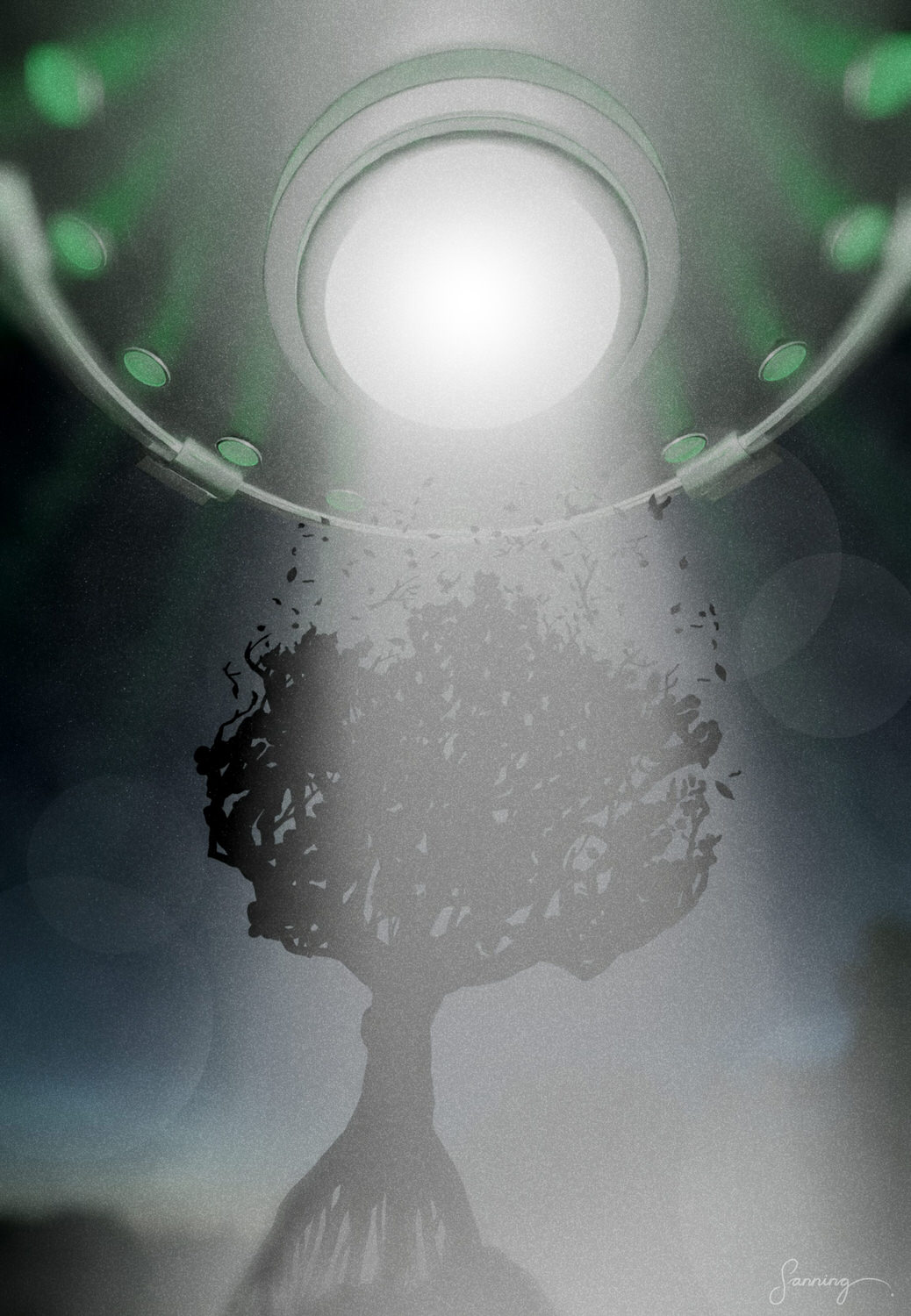 A UFO is collecting a specimen of a Tellurian tree with its tractor beam, with the tree completely ascending from the ground and its night-time dwellers awoken in shock.

END_OF_DOCUMENT_TOKEN_TO_BE_REPLACED Mr. and Mrs. Mole return home, only to find their chinaware in shatters – the whole condominium is shaking from a bathroom renovation upstairs.

END_OF_DOCUMENT_TOKEN_TO_BE_REPLACED "Robot Encounter" is a digital artwork made by Sanning Arkitekter, incorporating the interface between 2D and 3D, embodied in the encounter between fairy and robot. Looking from a country road, we were enchanted by the sparse birch grove, and the lighting which was filtered through the woods. Embraced by the equally sheer and sharp sunlight, we took a photograph of the surroundings, as well as captured an HDRI of the same. Our ambition was then to create a still shot from an occluded narrative, atmospheric and beautiful.

END_OF_DOCUMENT_TOKEN_TO_BE_REPLACED

Atelier Aurélie is a small atelier envisioned as our dream workplace for painterly endeavours, although the project is presented here as a sculptor's atelier. Designed by Sanning Arkitekter, modeled in Blender, textured with Substance Painter and Megascans, and rendered in Unreal Engine 4.

END_OF_DOCUMENT_TOKEN_TO_BE_REPLACED 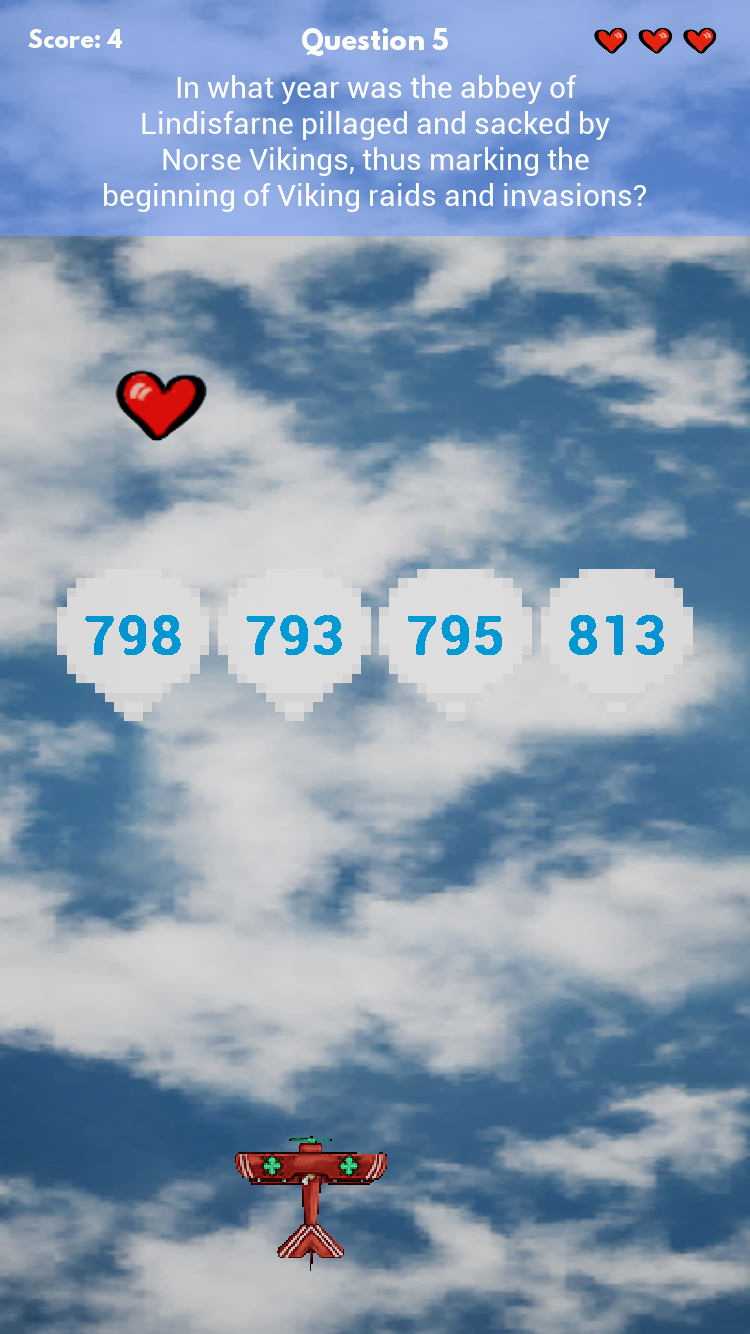 "History Flight" is a history quiz game for Windows and macOS where you control the sideways movement of an aeroplane, and navigate it – guided by your knowledge of historical facts – safely down the road of history. Each question has four answers, and it is only by maneuvering through the correct one which continues the pilot's journey. Developed by Sanning Arkitekter in Unreal Engine 4 with the aim of expanding the understanding of the game engine, beyond architectural visualization, it is in essence a very simple game. But rather than only allowing it to teach and entertain the two of us, we hereby publish the alpha build as a free download (see link below), since we believe there might be more history buffs out there, willing to test their knowledge and potentially expanding it by doing so. With only 134 questions included, the alpha build is lacking content, but the existing questions do stretch from A.D. 68 to 1995, and sample categories like world politics and religion, discoveries and the arts, monuments and individual fates. The difficulty level varies between the fall of the Berlin Wall and the collapse of the feudal system in medieval Japan, between the lunar landing and the first opera premier, between Nelson Mandela and the historical role model for the fictional Robinson Crusoe.

END_OF_DOCUMENT_TOKEN_TO_BE_REPLACED 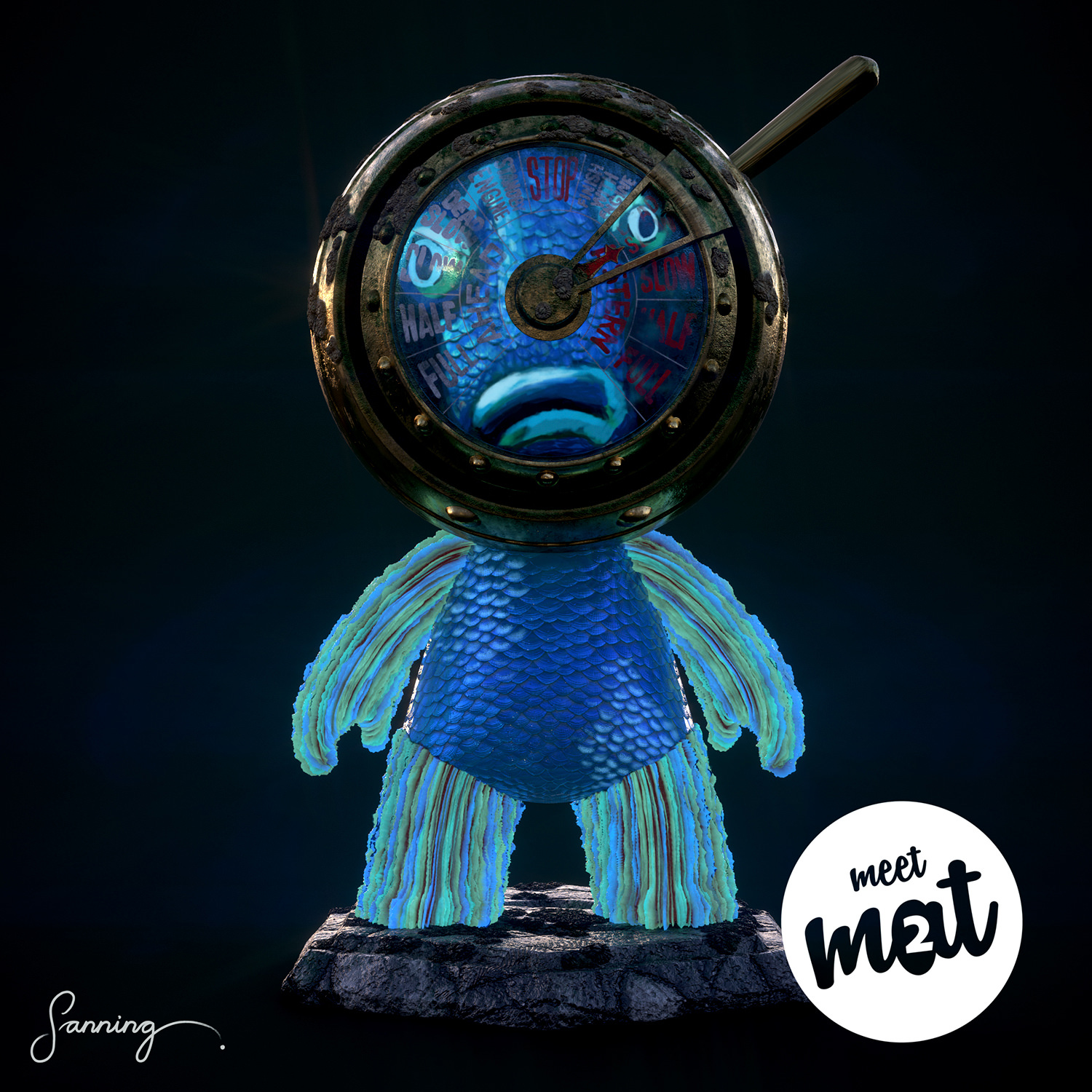 "Meet Don Mat Pesci" is Sanning Arkitekter's entry for Allegorithmic's texturing contest Meet MAT 2 – the rules were simple: all participants used the same 3D model as a starting point ("Mesh Mat"), and the same tool to their disposal (Substance Painter), only to freely texture the 3D model to their heart's content and guided by their artistic vision, only limited by the topology of the mesh (displacement was allowed, and encouraged, but since displacement only has an effect perpendicular to the tangent [in the same direction as the normal] for any given point on the surface of the mesh, it is not without limits).

END_OF_DOCUMENT_TOKEN_TO_BE_REPLACED

"The Moose" is Sanning Arkitekter's entry to Smekab Citylife's 72-hour contest The Pleasant City – the purpose of the contest was to capture innovate ideas and visions of the products of tomorrow and the development of them. It was also encouraged to consider steel as a primary material. We quickly produced a proposition about dedicated charging racks for electrical scooter, with solar charge as an option. Our aim was to resolve the chaotic situation on the streets of Stockholm, where electrical scooters were frequently found in the middle of streets as well as blockading movement on pavements. That would be pleasant, wouldn't it?

END_OF_DOCUMENT_TOKEN_TO_BE_REPLACED

Insect Mobile Mia is the fruition of a project seed sprung in a little miracle – the birth of our son's cousin! We machined and painted a baby mobile with insects, which hopped along Grandmother on the train to the newly born girl.

END_OF_DOCUMENT_TOKEN_TO_BE_REPLACED

Oyster Inside Out – ”Do You Know of Pålsundsparken?” (Contest Entry, 2019) "Do You Know of Pålsundsparken?" is Sanning Arkitekter's entry to Architects Sweden's (Swedish union organization for architects) and Oyster's (a landscape architecture sub-committee of theirs) student contest Inside Out – the purpose of the contest was to strengthen the identity of any location perceivably lacking of it, and to do so with a focus on the theme of nostalgia. We identified a neglected urban park in the south-west of central Stockholm, and found traces of an old playground from the '50s, with only a single sculpture remaining. Our aim was to rebuild the lost playground, not as it was, but as it clearly isn't.

END_OF_DOCUMENT_TOKEN_TO_BE_REPLACED Brian Robertson's co-producer stated that a live album from the Diamonds and Dirt touring was in the making. We took up the pencil and sketched two concepts for the album cover art.

END_OF_DOCUMENT_TOKEN_TO_BE_REPLACED

"Behemoth" is an experiment in character design based on the literary character with the same name, the enormous cat in Michail Bulgakov's novel The Master and Margarita.

END_OF_DOCUMENT_TOKEN_TO_BE_REPLACED 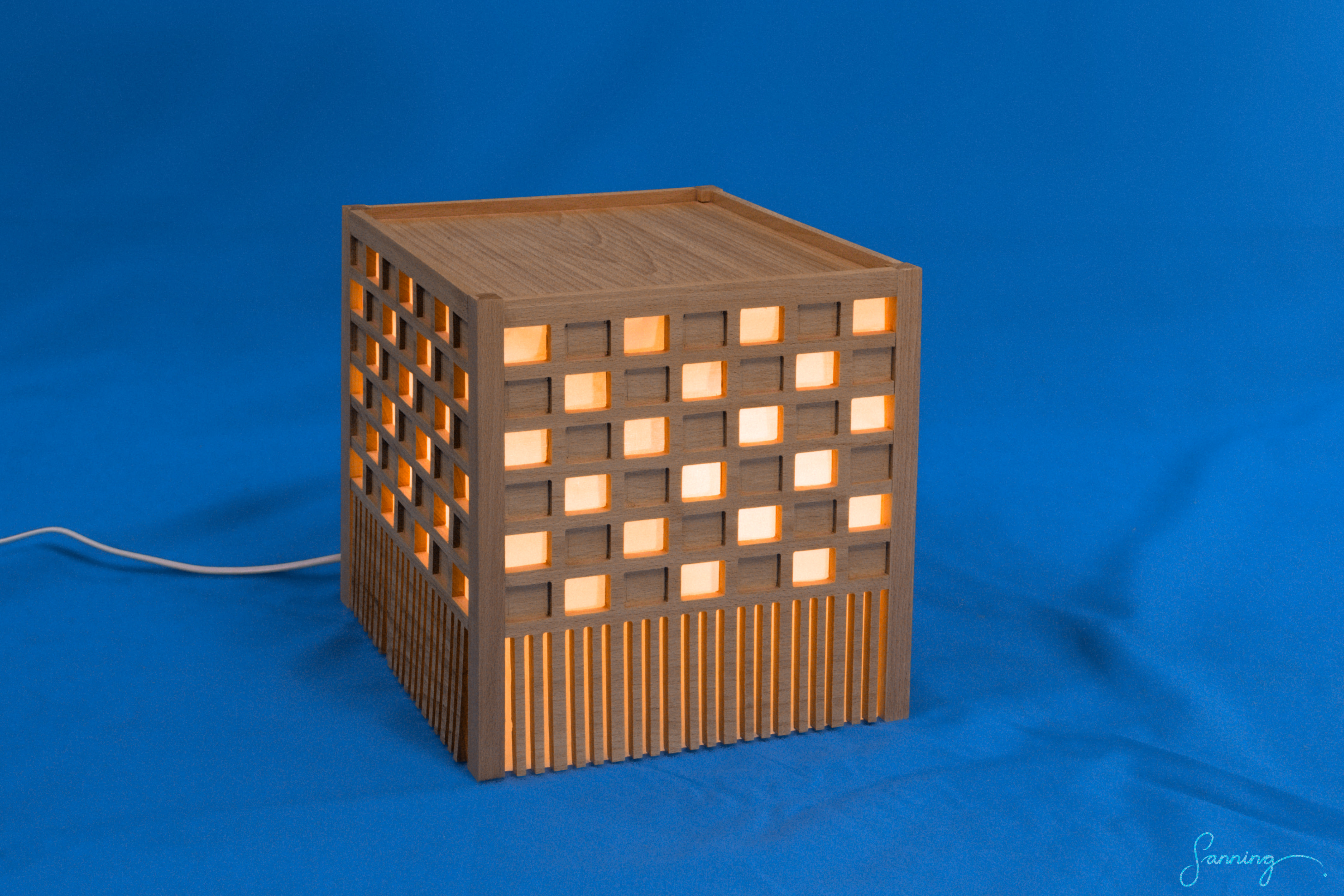 "HL2" is Sanning Arkitekter's entry to Arkipelago Stockholm's furniture workshop 2018, "One Light Stand". Arkipelago Stockholm (the KTH Royal Institute of Technology instance of the overarching student organization of Sweden's architecture schools, Arkipelago) invited the contestants to design an armature consisting of beech and rice paper, and required the use of a specific light bulb of warm temperature. In our home we had converted a physical model in the scale of 1:50 from a first-year project, with checkered openings in the façade, into a lamp. We realized that this workshop was an opportunity to make a worthy successor to that makeshift lamp – this time with the use as armature intended from the beginning.

END_OF_DOCUMENT_TOKEN_TO_BE_REPLACED 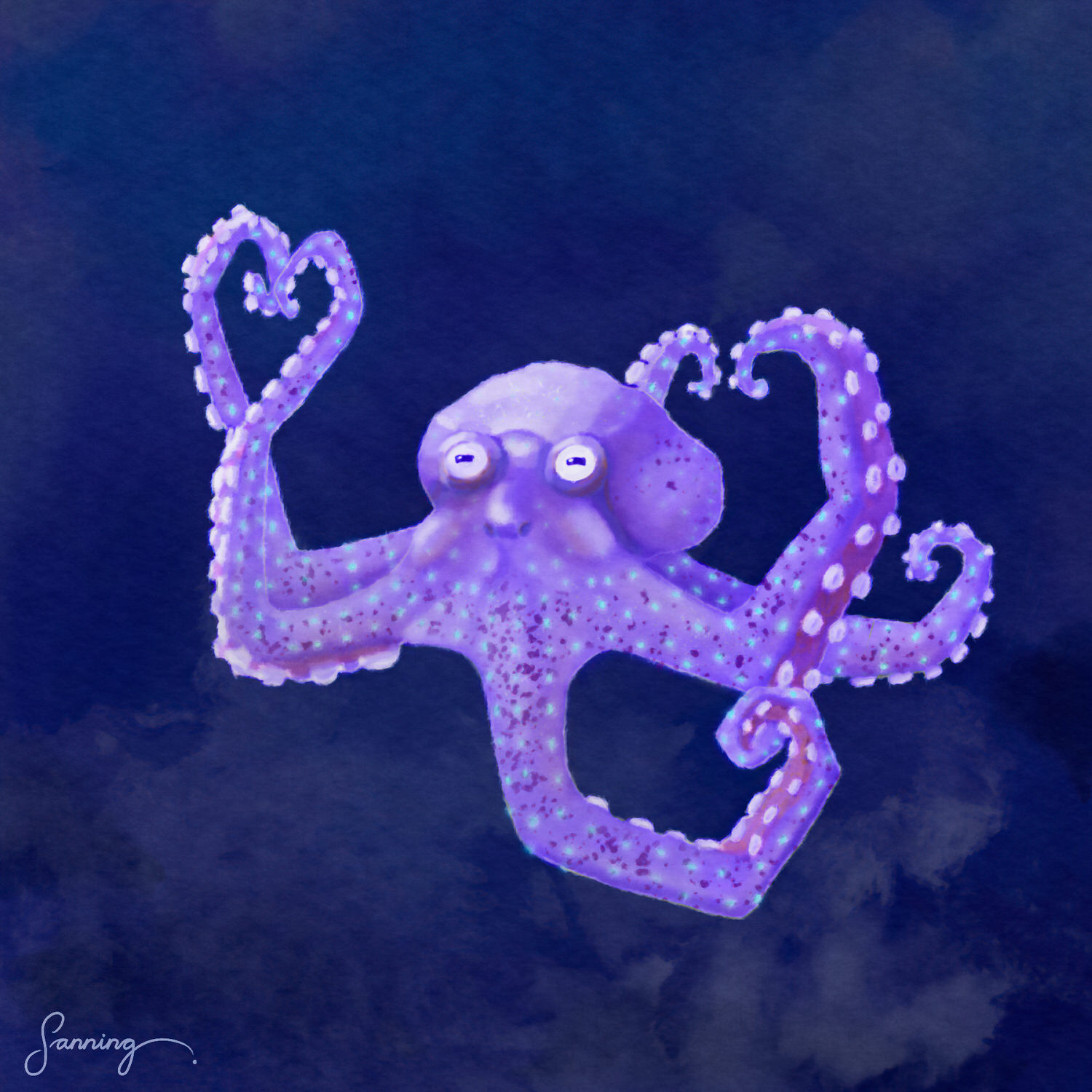 "The Jolly Octopus" is an experimentation in character design for an amiable deep-sea creature, living by the devise "Losing a limb or two, doesn't matter at all as long as I got you!"

END_OF_DOCUMENT_TOKEN_TO_BE_REPLACED "Esplanade Elementary School – a postmodern, monumental school in Årstafältet" is Sanning Arkitekter's bachelor's degree project in architecture at the Royal Institute of Technology in Stockholm. The degree project is archived and retrievable through the DiVA portal (the Digital Scientific Archive) – the archive record is found here, and the project in full here (the page may need to be reloaded to start viewing of the document). Below is a short description of the project.

On Saturday May 26th, A.D. 2018, the ground work is initiated for one of our time’s most expansive housing projects. Årstafältet, a predominately natural park in southern Stockholm, will during the next twelve years be urbanized to two fifths of its total area, giving context for an entirely new urban quarter, accomodating 15 000 new Stockholmers. The scale of the housing project is comparable to the whole population of Nynäshamn, or one fifth of Kungsholmen’s.

END_OF_DOCUMENT_TOKEN_TO_BE_REPLACED

"Kela Armchair" is Sanning Arkitekter's entry to Arkipelago Stockholm's furniture workshop 2017-18, "Chairway to Heaven". Arkipelago Stockholm (the KTH Royal Institute of Technology instance of the overarching student organization of Sweden's architecture schools, Arkipelago) invited the contestants to design a chair made of birch wood and leather. We allowed ourselves to be inspired by the design of Aifos Step Stool – the first prototype of which, "Aifoskela Kitchen Ladder", was constructed during the previous year's workshop – and designed a fullsize armchair, related to but not identical to the design of its older little sister.